So I have been picking up pieces lately..  mostly rally inspired bits.  I share most of them on the forums, but these are only going to be posted here.  kind of the prototype of sorts.  Many are familiar with the rear parcel tool partician box used in rally cars.  Well, I am under a tight budget so I am improvising.   Since back in the 60s a privateer wouldn't necessarily buy all the factory goodies, they would usually improvise too and make their own.

with that in mind, I have started collecting some supplies:  emergency triangle, first aid kit, small shovel (for snow, ice, mud etc).   Tools will go in the trunk, so will spares and spare tire air bottle...  but these are more along the lines for quick access things. 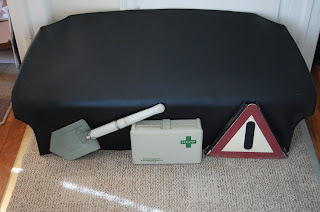 So, I have to ask:  Cool or Not Cool?  This is just a very rough mock up, and a first iteration of my madness.  But it does give you an idea of what I am doing.   The shovel is being passed on for another (on its way), and the first aid kit is being passed on for another kit thats a bit cooler.  The warning triangle is a period german piece.  all bits will be strapped in using black leather straps (belts).    I am debating mounting the shovel to the roll bar down arms...

or perhaps to a roof rack when i get one again.   Oh yeah.. and about that, i have a gerry can ready to go, as well as a vintage studded tire lined up.  now i just need a roof rack too..
Posted by Harry at 6:31 PM 1 comment:

All graceful instruments are known 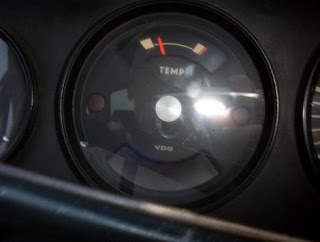 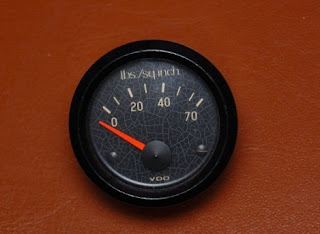 With this in mind I wanted to upgrade the gauges to be a bit more useful.  I wanted the oil pressure directly in front of me where i would see it, and i wanted something else useful to cover the hole vacated by the old oil pressure gauge.  The 911 came with dual gauges for oil pressure and temperature.  This was the best choice for the 1st problem, and so I sourced a 68 date stamped 911 twin gauge on ebay a few months back.

Next I needed a solution for the hole next to the headlight switch where the old oil pressure gauge was.  I noticed there was a 68 911 with sports purpose rally options on the Early 911S registry a month or so ago, and in the exact spot where i had my old gauge this car had an outside temperature gauge.  This was used especially in cold weather conditions to gauge whether there could be ice on the roads they were rallying on. 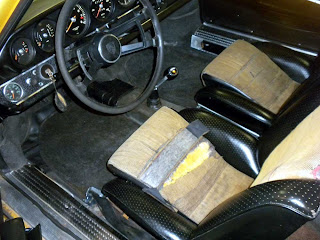 After doing a bit of searching, i quickly found that VDO, the original manufacture of our factory porsche gauges, made an aftermarket outside temperature gauge that was the exact size i needed, in black, with white lettering, and an orange dial.  the only big tell was that the center of the dial on this gauge had a black cap instead of a brushed stainless steel one.  Still, close enough and perfect for my needs.

With a bit of rewiring, and hooking up the temperature sensor to the inside of the front bumper, I was in business.  Fits like a glove and looks the part.  A true period rally option.  I wish it had the patina my old oil pressure gauge had, but I can't be too picky. 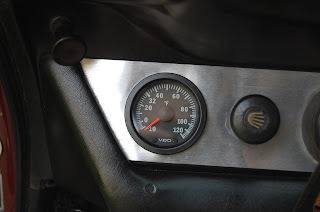 Next i had to install and rewire my new dual gauge.  After some rerouting of the wire from the pressure sender, installing some new light bulbs and wiring up a new positive line, I am in business.  I even managed to get the dummy light to work!  I had thought it was disabled all these years because i had the oil pressure gauge, however the bulb holder was just bad. 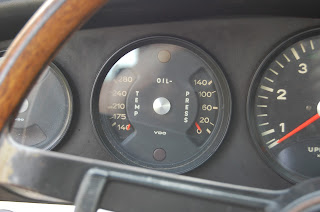 Sitting On Top Of The World

About a month ago I received my new seats (new to me) for Fritz.  The seats, Nurburgrings from GTS Classics, came to me second hand on one of the forums.  This set was never installed before either, so it was a deal i couldn't pass up.

My old stock seats were not the most comfortable available; they were too springy, they didnt hold you in to the seat in the twisties, and what ever comfort had ever been there at one point had left a while back.

Here are some before and after shots: 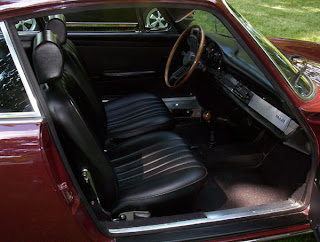 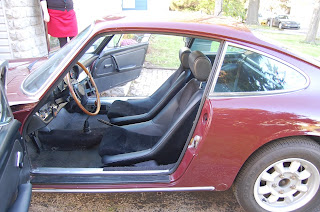 I also added a NOS rear window demister panel.  These were used in the 40s-60s before electric rear window defoggers became widely available.  These panels were essentially clear plastic with a thick rubber boarder with adhesive on it.  They essentially kept the atmosphere the same inside the panel, and thus would keep it from fogging over. 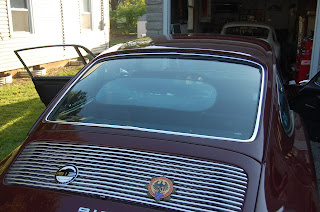 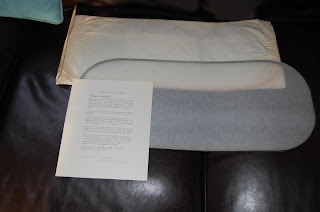 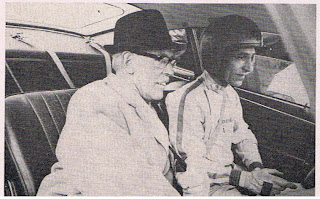 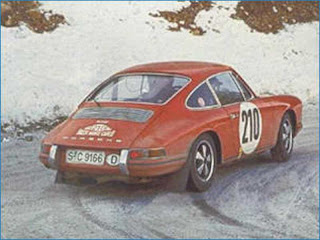 And my friend Casey Putch's rally set up Mini with one 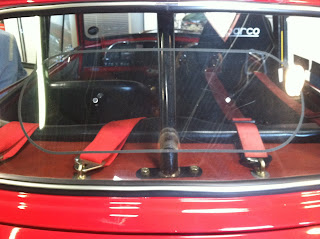 Lastly I removed my radio and installed custom made a radio delete plate, courtesy of my friend Mike DiLeo 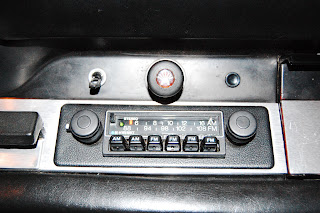 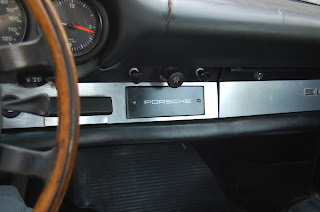 These plates were used on vehicles purchased with out a radio, either because they did not want to purchase the radio option, or because it was a sports purpose vehicle and did not need the radio (or want the extra weight).

Mine of course is a home made replica.  I do have a real original one (see below with orange background), but decided to sell it in order to help fund the upcoming suspension project.  Mike did a pretty good job on his replica, didn't he? 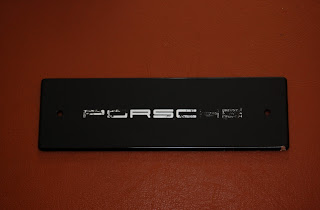 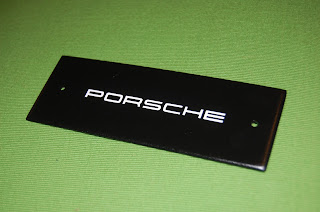 Well thats it for now.  In the next post we will cover some other updates I have been working on -Gauges and instruments.

Well, a month has gone by since my last post.  I am very sorry for the delay and the time away.  I have been really busy with work lately, including a business trip to Dallas, working on projects around the house and trying to get stuff in order for Hershey Swap meet and the Mountain Melee Rallye in New Hampshire in a month.

Quite a bit has happened in the last month.  First, the greatest holiday of all took place -opening day.  I am hopeful my Tribe will do well.  They are 4-4 right now, but its early and the baseball season is long.  We lost a legend this month too -Ferdinand Alexander 'Butzi' Porsche, who designed the 911 (and 912), and the 904 and headed up the design department in the early-mid 60s for Porsche, overseeing development in many great classic racing Porsches passed away.  Click Here to read more about his life and passing. 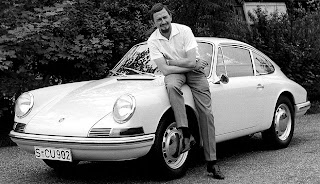 I have also purchased two more 912s, a sold shell and a rusted out rolling chassis.  I was planning on taking them and making one good car or parting them out all together, but I have been so busy lately that i have barely even touched them, or acknowledged their existence, except for seeing one in the garage, and the other when i take Fritz out of the storage facility. 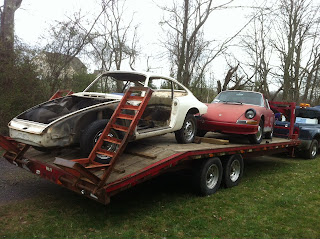 When you die, if you get a choice between going to regular heaven or pie heaven, choose pie heaven. It might be a trick, but if it's not, hmmm, boy. -Jacky Handey


So, I have been working non stop for the last two months on client reviews.  I finally saw an opening in the schedule to take a much needed personal day today, 3-14.  Great timing too, because there isn't a could in the sky and it should be 75 degrees out.  So, I am going to celebrate "Pi day" by taking care of some much needed things.  First i need to ship off some items people have purchased from me.  I am also hoping to receive some items I have purchased today too.  Then after that it's garage time, as well as a trip to the park for Dos Dingos de la Muerte (aka: my bulldog Blue, and my fiance's weinerspaz Pepper).   I really need to spend some QT with them.

I also have a feeling a dram of Glenlivet will be in order at the end of the day.

Last week I made a post discussing some changes coming up.  I wanted to give a little more insight into the madness -lets call it project Group 2.  Back in the day there were two classes in rallying, under FIA rules.  The first is called Group 1.  This, as discussed in my previous post about 912s in Motorsports History is pretty much a bone stock class (down to the interior), with the exception of lighting and tires.  That is pretty much where Fritz currently sits.  My plan is to take it to the next level, loosely based on Group 2 rules. Many have done the RS, R, TR, RSR clones, and I have wanted to buck the trend with my rally car approach for a while now.  Many of these are ideas I have had for about 10 years now, and have grown and developed over that time.

New period buckets have arrived this week, and i picked up a replica roll bar for a 911 R/TR/ST/RS/RSR a few years ago at the Stoddard Swap Meet from Dave Conklin.  An overhaul of the entire suspension will be carried out this spring.  A brake overhaul is planned in the nearish future, as well as a redo of the interior.   Included in this venture will be all kind of cool period correct rally items.. equipment, period tools, accessories and items picked up along the way as satanic details to finish out the car.

There are a lot of great ideas.. some will be implemented, and others will not.  Inspiration is coming from period 911 and 912 rally cars as well as other cars on the early 911S forum, specifically those of Chris Nielsen, Mike DiLeo, and Bob Tilton. Many will be new takes on old ideas, some will be new ideas, and some will be old details not seen since back in the day.

Some things will be factory based ideas, but most will be taken form the point of view that Fritz would have been driven by a privateer rallying a 912 in smaller, less famous rallies than say Monte Carlo (after all.. it's a 912... the budget rally Porsche!).  Needless to say, if it was period correct, it could be fair game.

It will be interesting to see how everything turns out, which ideas I keep and which ones I disregard.  Needless to say, everyone will find out the specifics and devilish details of the build in the coming months. 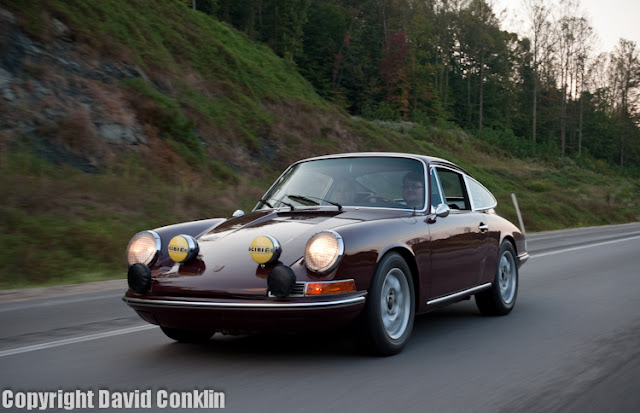 image courtesy of Dave Conklin http://renn-spot.blogspot.com/
Posted by Harry at 12:31 PM No comments:

On June 16, 1967, George Vaccaro picked up his 67 Slate Grey 912 coupe.  He still owns it today and winning concourse and driving it all over northern California.

He recently posted 8mm video of that day.  Enjoy a little slice of early 9 series history.

Be sure to check out my favorite links and blogs